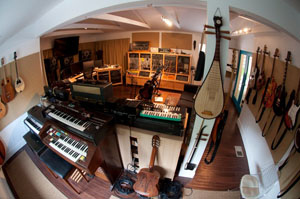 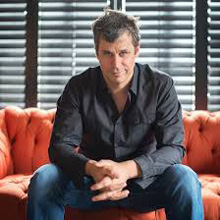 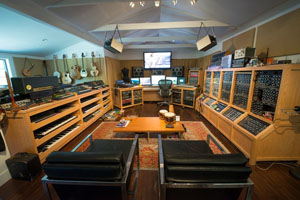 Everyone remembers 10 years ago when Napoleon Dynamite and it’s quirky score made history in 2004. The movie earned $46 million, making it one of the ten most profitable low budget films of all time. John Swihart won the 2005 Satellite Award for the score and was nominated for a Grammy.

Swihart’s world has expanded exponentially in the last ten years: 40+ film scores including Youth in Revolt, Employee of the Month and The Brothers Solomon, a multitude of television credits including How I Met Your Mother, Men at Work and Greek, and advertising campaigns for The Home Depot, Farmers Insurance, USPS and The Salvation Army.

He also built the ultimate composer “Play Pen,” a magical studio stocked with an elaborate assortment of instruments and every imaginable type of analog and digital gear.

John Swihart is a man at the apex of his creative powers; as at home with an acoustic guitar and piano as he is with an orchestra, Theramin, wall of Moog synthesizers or the latest in digital tech.

You’re invited to listen to what he’s been up to since Napoleon Dynamite (top left: “JOHN SWIHART INSTRUMENTAL SELECTS” & “JS SONGS CO-WRITTEN WITH TV WRITERS)”. Hold on to your hat…

Unique sounds and surprising instrument choices put John Swihart on a path to creating unpredictable contemporary scores. His distinctive style can be heard in amultitude of films, television series and commercials.

John Swihart was raised in Bloomington, Indiana, the son of a physicist based at Indiana University. He spent a portion of his formative years in Europe and Asia, where his father would sabbatical. John studied Piano at an early age but was not deeply absorbed by music until he was eight when he found the saxophone, which he played exclusively before switching to guitar at 12 or so. In high school John was a big fan Miles Davis, Gershwin, Stravinsky and Ravel, as well as such bands as The Residents, The Dead Kennedys, Gang of Four and Captain Beefheart.

Swihart would leave Indiana to attend the renowned Berklee College of Music, in Boston. At Berklee, John was struck by the level of commitment of his classmates to immerse themselves in musical experimentation. This made for an amazing culture of learning in the tight-knit Berklee dorm, where there were always people playing and inspiring each other.

After years of performing in numerous bands, John decided it was time to put a studio together. The corporate communications and advertising work came, but the Emerson student films that John worked on made it clear that this would be the least restrictive and most creatively rewarding experience. Around that time John auditioned for the Boston production of Blue Man Group. The Blue Man Group experience was phenomenal, fun and creatively motivating. Working with some of the best musicians he’s ever met, Swihart played Chapman Stick, Bass, Guitar and Zither in the Boston, New York and Las Vegas shows.

When Swihart made it to Los Angeles, he scored a few Independent films before his breakout project NAPOLEON DYNAMITE premiered at the Sundance Film Festival in 2004. John is the long-time composer for the hit CBS series HOW I MET YOUR MOTHER starring Neil Patrick Harris and Jason Segal, which just completed its ninth and final season. His upcoming films include the film adaptation of Dean Koontz’s New York Time best-selling novel ODD THOMAS and Nick Cassavettes, THE OTHER WOMAN.