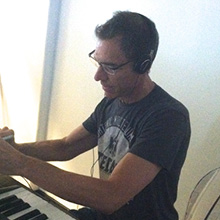 Andy is a composer, songwriter and former Arista Recording Artist. Equally adept at keyboards and guitar, he has composed music for all mediums. His score and songs for the feature film “The 5th Quarter” won best original score at the 2010 California Indie Film Festival. He also scored the trailer for the 2012 Oscar nominated film “To Hell and Back,” and original cues for feature films including “Sleepwalk with Me,” Labor Pains (Lindsey Lohan), Weathergirl (Harry Hamlin) and the score for “Rehab,” produced by David Caruso.