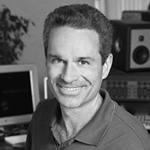 Executive Producer Dean Grinsfelder has been working with Visual Music since 1998 and is an Emmy Award-winning composer and music producer. He has produced music for hundreds of film, television and interactive projects over the past two decades.